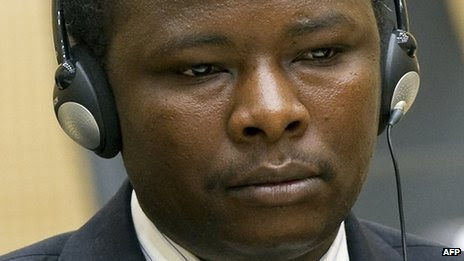 A Sudanese rebel charged with war crimes in Darfur by the International Criminal Court (ICC) has been killed, his defence team has said.
Saleh Mohammed Jerbo Jamus died on Friday afternoon during fighting in North Darfur, the statement said.
He was due to go on trial in May 2014 over a deadly attack on African peacekeepers in Darfur in 2007.
The BBC's Anna Holligan in The Hague says the court must get proof of his death before the case is dropped.
Other suspects at large
Mr Jerbo and fellow Darfur rebel leader Abdallah Banda Abakaer Nourain face three war crimes charges relating to the killing of 12 African Union peacekeepers in an attack on the AU's Haskanita camp in September 2007.
Continue reading the main story

Defence statement
The two men, who voluntarily surrendered to the ICC in 2010 to face the charges, have been free to leave the Netherlands and appear before the court when summoned.
In 2011, a pre-trial chamber found that there were "substantial grounds" to go ahead with their trial.
Mr Jerbo was chief of staff of SLA-Unity rebel group at the time of the 2007 attack but is currently in the Justice and Equality Movement group, the ICC says.
His defence team said he died in the north of Darfur on the afternoon of 19 April 2013 and was buried on the same day.
"Mr Jerbo was killed during an attack on his location by forces of the Justice and Equality Movement faction led by Gibril Ibrahim," AFP quotes the defence team's notification to the ICC as saying.
Sudan's president, two ministers and a pro-government militia leader have also been indicted by the ICC over Darfur and remain at large.
They deny the charges, saying the scale of the suffering in Darfur has been exaggerated for political reasons.
The conflict began 10 years ago when rebels began attacking government targets, accusing Khartoum of oppressing black Africans in favour of Arab communities.
The mainly Arab Janjaweed militia was then accused of carrying out a policy of ethnic cleansing against Darfur's black African population.
More than 300,000 people are thought to have died during the conflict, according to UN estimates.
The government in Khartoum puts the figure at about 12,000 deaths.
As many as 1.4 million remain homeless.
Though violence in Darfur has come down from its peak, there are still clashes between government forces, rebels, bandits and rival ethnic groups.
Share:
புதிய இடுகை பழைய இடுகைகள்
Loading...